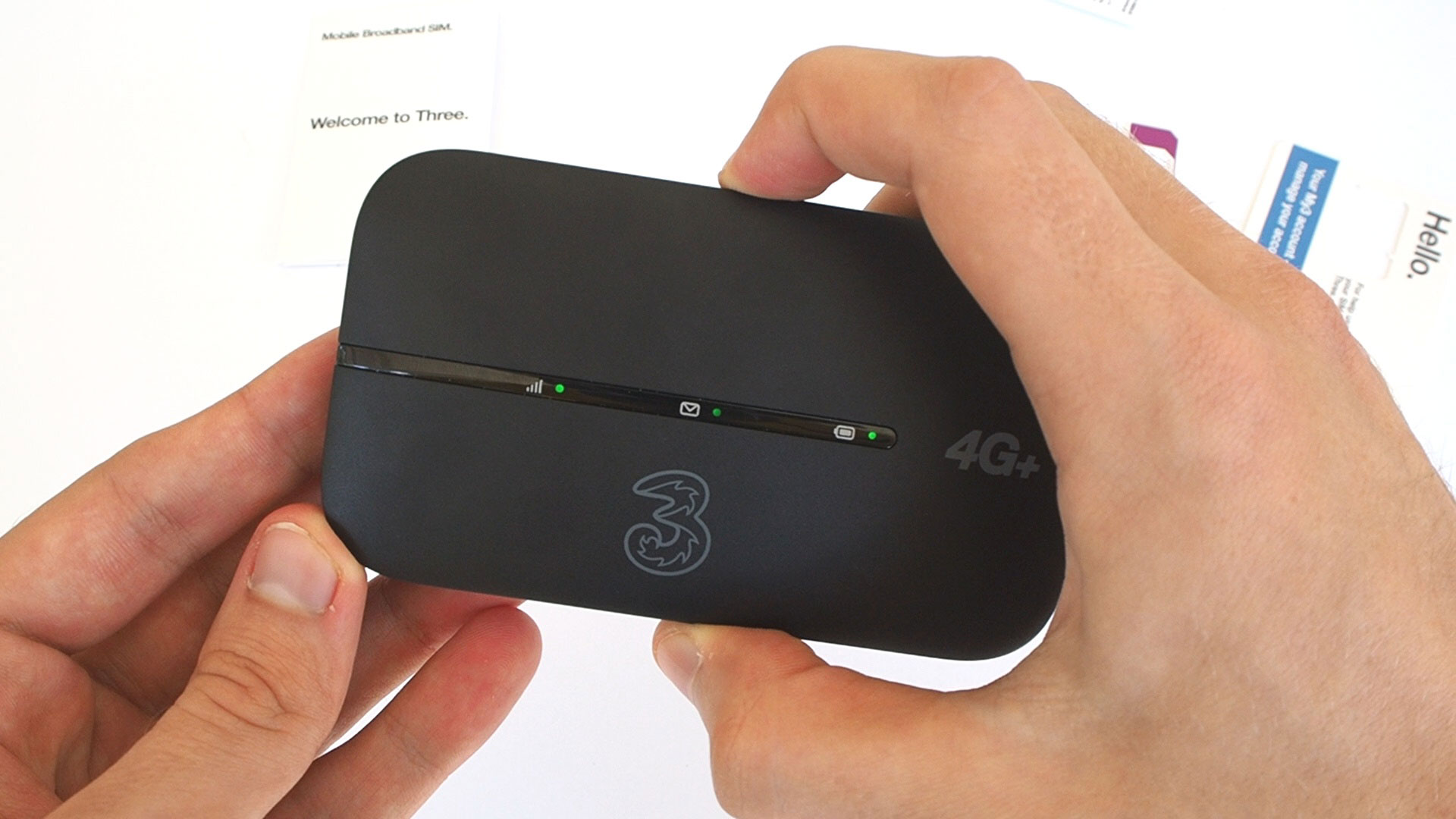 Considering getting online with a Three MiFi device?

In this article, we’ve unboxed and reviewed the Huawei 4G Plus mobile WiFi device, which you can buy from Three. We’ve also looked at Three’s mobile broadband network, and their data deals, to see if you should buy this MiFi device. 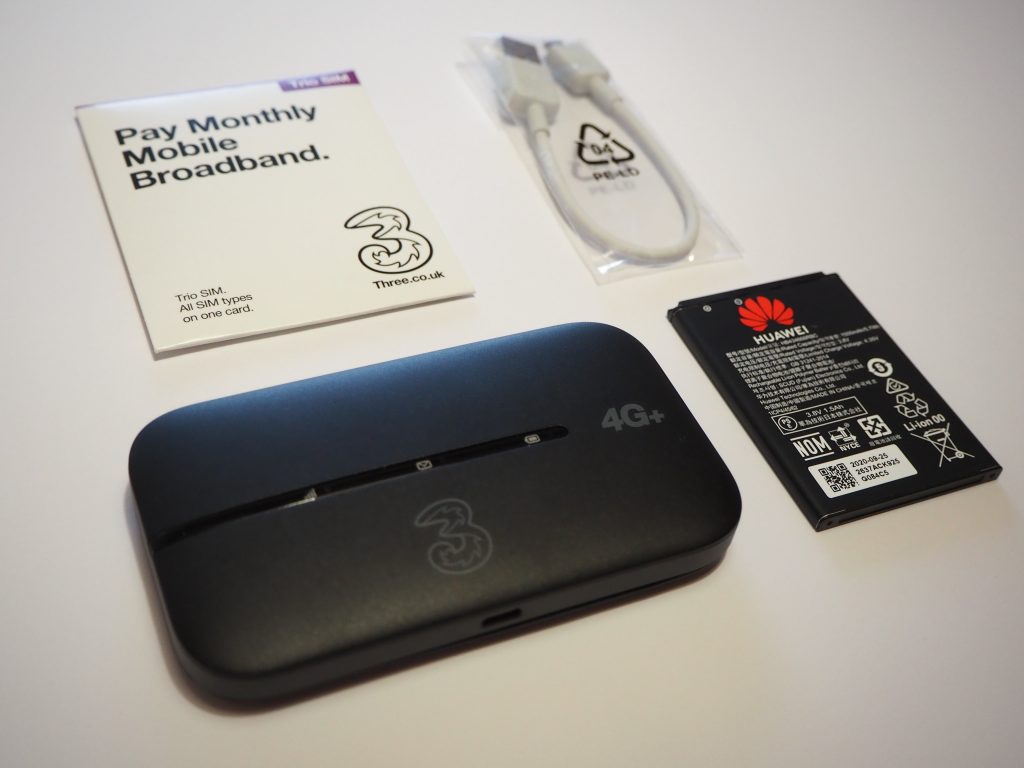 This device is like a miniature WiFi router, except it’s battery-powered. It creates a WiFi hotspot that multiple phones, laptops, and iPads can connect to at once. However, this device uses the 4G network, just like your phone, rather than getting internet access using your landline.

Currently, Three does not sell a 5G MiFi device, nor do they sell any mobile broadband dongles that plug directly into your computer. The Huawei 4G Plus is the only MiFi router or dongle that Three currently offers. 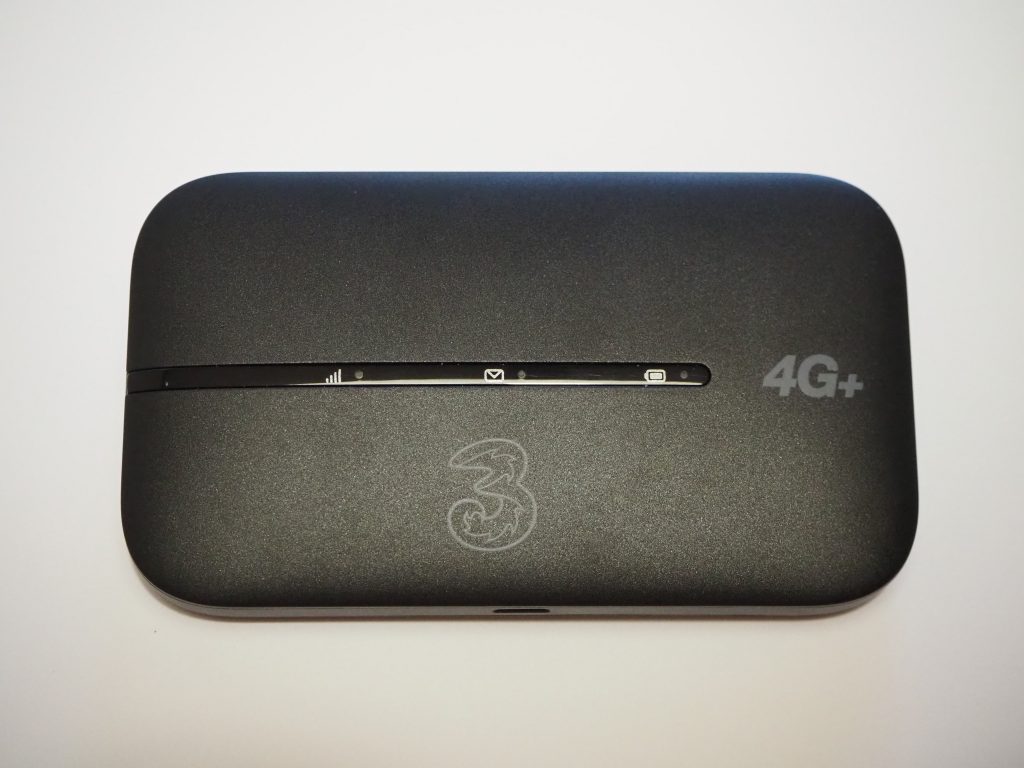 Three’s MiFi device typically arrives on the next business day after you order it, unless you order in the evening. It ships inside a small box. 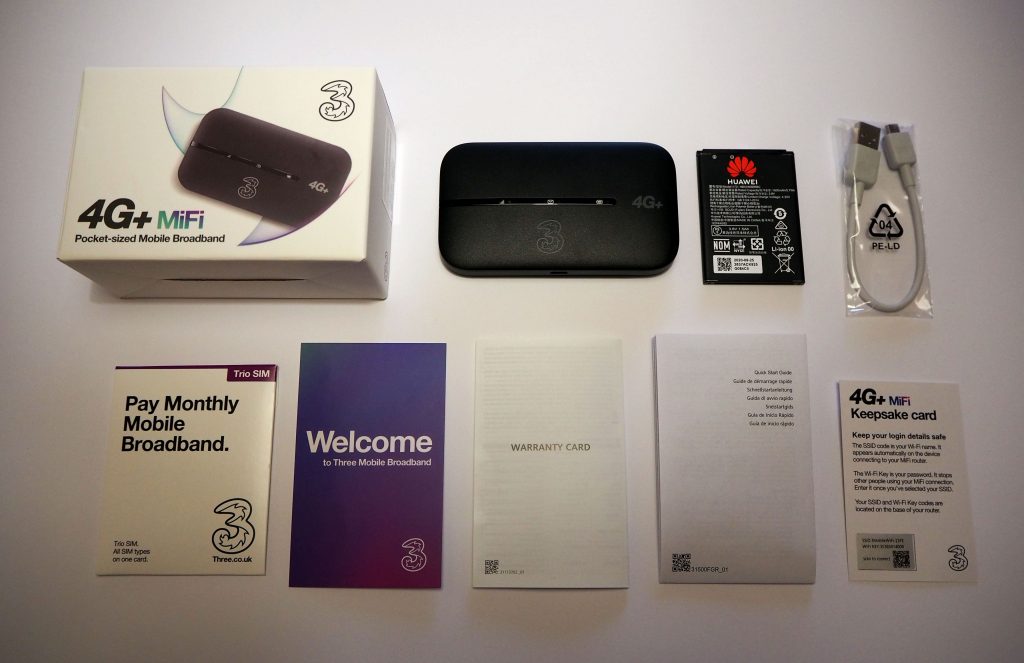 Setting up this mobile broadband device is quite a simple process.

Before we begin, you can watch this unboxing on YouTube, if you’d prefer.

The first thing to do is remove the back cover from the MiFi device. It attaches using a number of plastic clips, located around the edge of the case. To remove the cover, there is a small gap in one of the corners, which you can pry up from.

At this point, the next thing to do is place the SIM card in its slot.

First, remove the SIM card from its packaging, and push it out of its holder. You want the micro SIM, which is the green one (the second-biggest).

The SIM card slot has a small metal flap, which you need to lift up. Then, you can place the SIM card in its slot, as shown, with the cut-out corner facing the bottom-right. There is also a marking on the device to show you which way the SIM card goes in.

Now you have the fairly simple task of putting in the battery. Simply line it up with the four golden bits at the top right, and slot it into place. 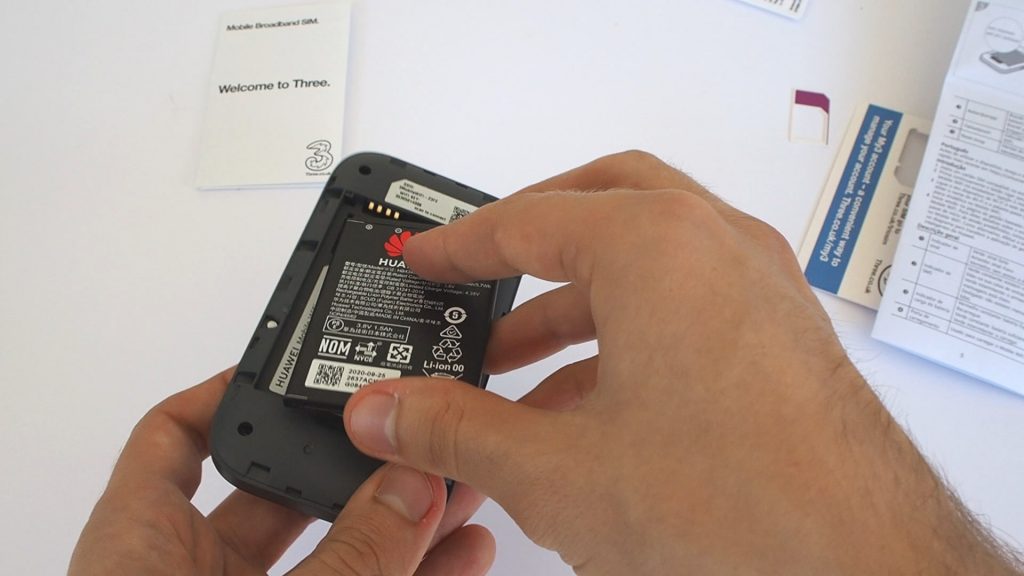 Now that the SIM card and battery are in place, you can turn on the MiFi device. Three ships this bit of kit with some charge in the battery, so you don’t need to worry about charging it before you begin using the device.

The first thing to do is hold down the big power button on the top, until the three lights turn green. If the 4G network light on the left doesn’t come on at first, this may mean that you don’t have good 4G signal right now. 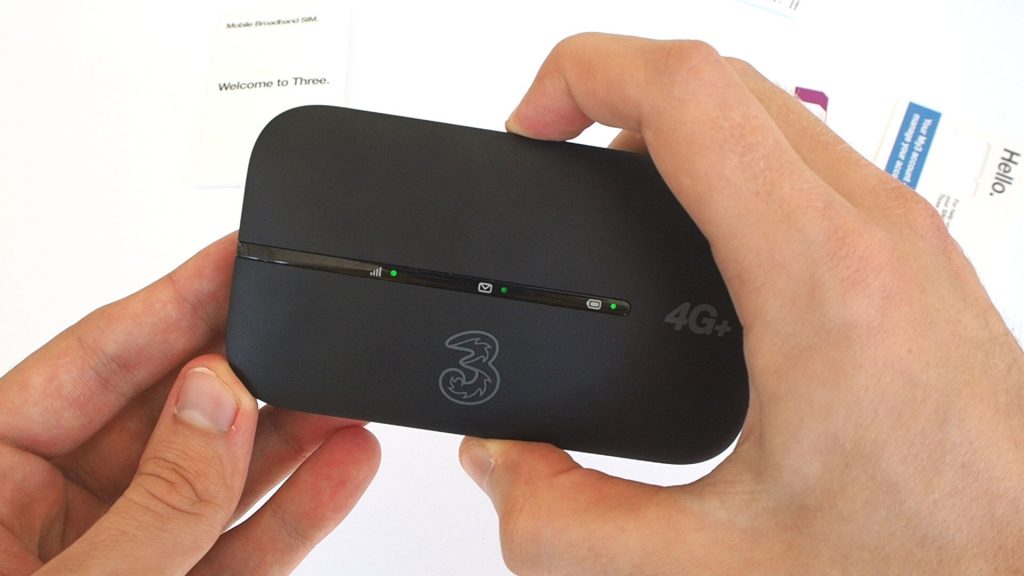 If you search for a new WiFi network on your laptop or phone, your Three MiFi device will show up as a network beginning with “3MobileWiFi”. Then, you’ll need to input the password shown on the inside of the device, or on your WiFi keepsake card.

Alternatively, you can also scan the QR code on the keepsake card using your phone, to instantly connect to the WiFi network. 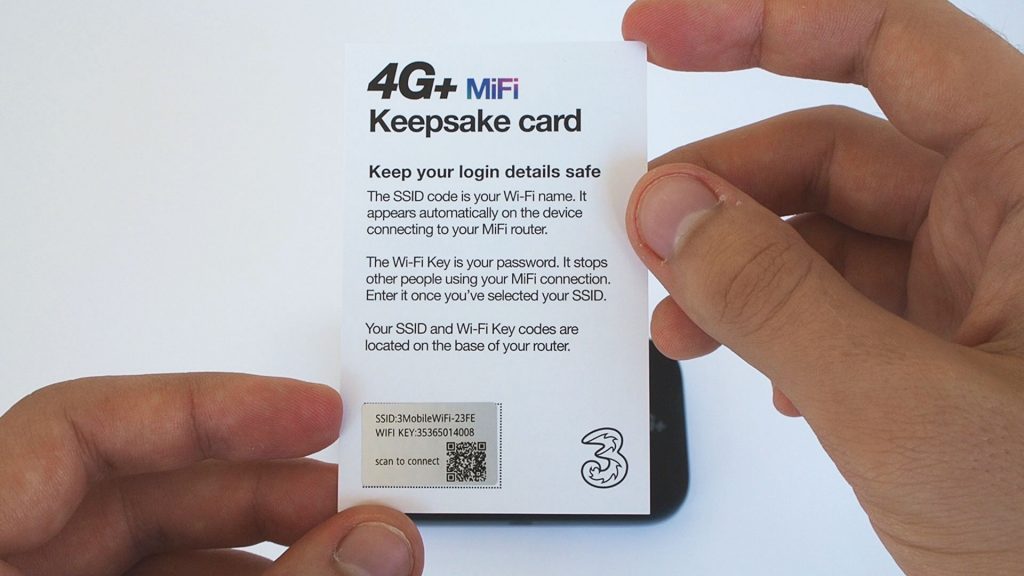 There are a number of things to like about Three’s MiFi router.

What’s not so good about the Three MiFi device

There are also some drawbacks to this mobile WiFi device.

Now that we’ve shown you a bit about the 4G Plus MiFi router, we’ll explain how you buy this device from Three, and the MiFi deals they offer it with.

Three currently offer their MiFi device with a number of different mobile broadband data deals, on a range of different contract lengths.

We must say, it would be good if there was more choice when it came to the different data bundles available. If you think you need 100GB of data for example, you’ll have to go for an unlimited data plan instead, since there is no 100GB deal available right now.

Typically, the Three MiFi device costs anything from £13 to £26 per month, depending on how much data you get, and the length of the contract. Free shipping is included with each deal.

It’s important to note that each year, your monthly cost will increase by 4.5%, no matter which contract you choose. Therefore, if you enter into a 12 or 24 month contract, some of your future payments will be higher than your current ones.

Also, Three’s pricing quotes assume that you will use direct debit, or another recurring payment method. If you don’t, the price will be £5 per month higher.

Sometimes, Three runs a special deal with their MiFi device plans. Currently, you can 6 months half price with their 24 month and 12 month contracts.

To view Three’s current range of MiFi deals and prices, visit their website.


How fast is Three MiFi?

Before buying Three’s mobile WiFi router, you may be wondering what download speeds you will get with the device.

To find out how fast the device will be, it’s a good idea to use Three’s network coverage map. 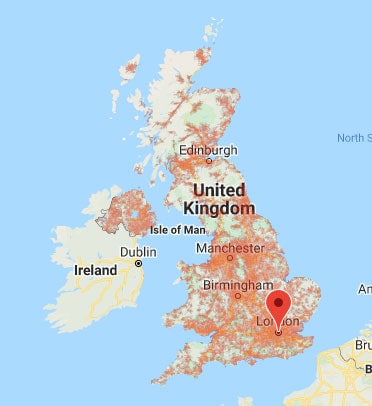 To use the network coverage map on Three’s website, simply put in your postcode, and click the “4G” tab.

Ideally, you want to ensure that you have good indoor and outdoor 4G speeds at your address. If you do have good 4G coverage, you should be able to get speeds of 15-50Mbps, depending on where the nearest mast is.

If you can only get 3G signal where you live, you can still use Three mobile WiFi. However, you will likely only get download speeds of 3-5Mbps, which is quite slow.

To see how much mobile broadband speed you really need, use our internet speed needs calculator.


Can I use Three MiFi abroad?

If you’re considering using mobile broadband to get online, this might be because you want to travel with the device.

Fortunately, you can use the Three Huawei MiFi device overseas, at least in most foreign countries. However, you will need to set up roaming. To do this:

It’s important to remember, your data allowance doesn’t work the same as it does overseas compared to in the UK.

In some countries, the mobile network infrastructure is slightly different, meaning that your MiFi device won’t work. However, this only applies to very few countries.

Also, it’s important to note, if you’re a pay as you go customer, you need to top up before you leave the country in order to get online overseas. This isn’t necessary if you’re on a pay monthly contract.

You can also buy a separate roaming SIM card to use with this device, if you’d prefer to save money when getting online overseas.


Is Three MiFi any good? Our verdict 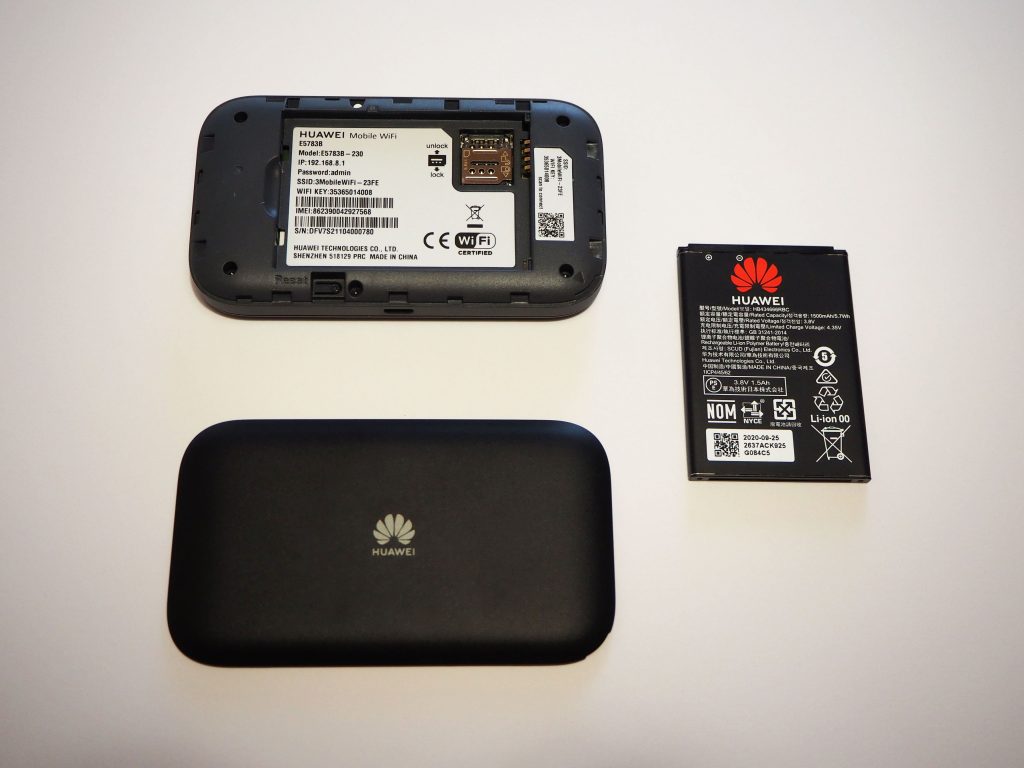 We’ve spoken to people who have used this MiFi device to successfully:

This MiFi router does have some limitations. It’s not designed to have massive numbers of devices connected at the same time. Also, the WiFi range is quite short, at just 10 metres.

If you decide to buy this product, ensure that you have good Three mobile broadband coverage at your address, including indoors. If you don’t have good 4G signal where you live, you might only be able to get speeds of around 5Mbps, which is very slow.

Overall, we rate this MiFi device 4.3 out of 5 based on its speed, WiFi connectivity, and value for money.

There are a few other devices you could consider to get online using mobile broadband, other than the Three Huawei 4G Plus.

If you want to use 4G internet as your main way of getting online at home, it might be worth considering the Three 4G Hub or 5G Hub router. 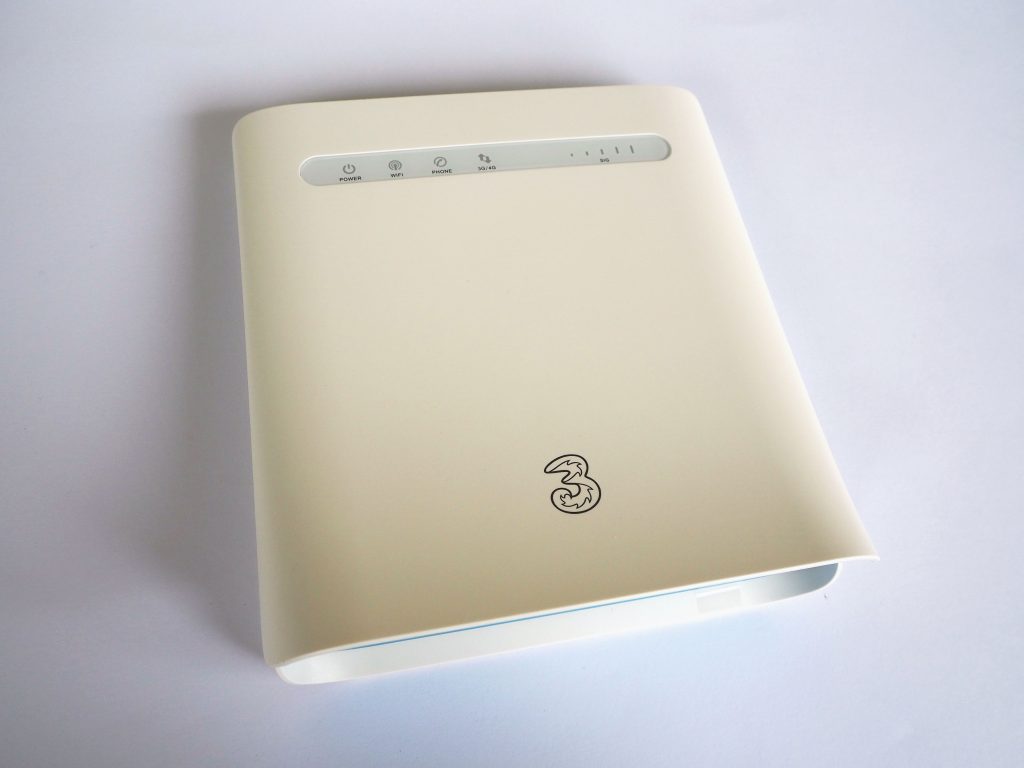 These bits of kit work in a similar way to a MiFi device, in that they create a WiFi hotspot. However, they plug into the wall, rather than having a battery, meaning they’re less portable. But since they’re bigger, more like a typical WiFi router, they can handle more devices connecting at once (up to 64, in this case).

The 5G Hub costs a bit more than the Three 4G Hub, but offers much faster speeds. Put your postcode into the Three website to see if it’s available at your address. 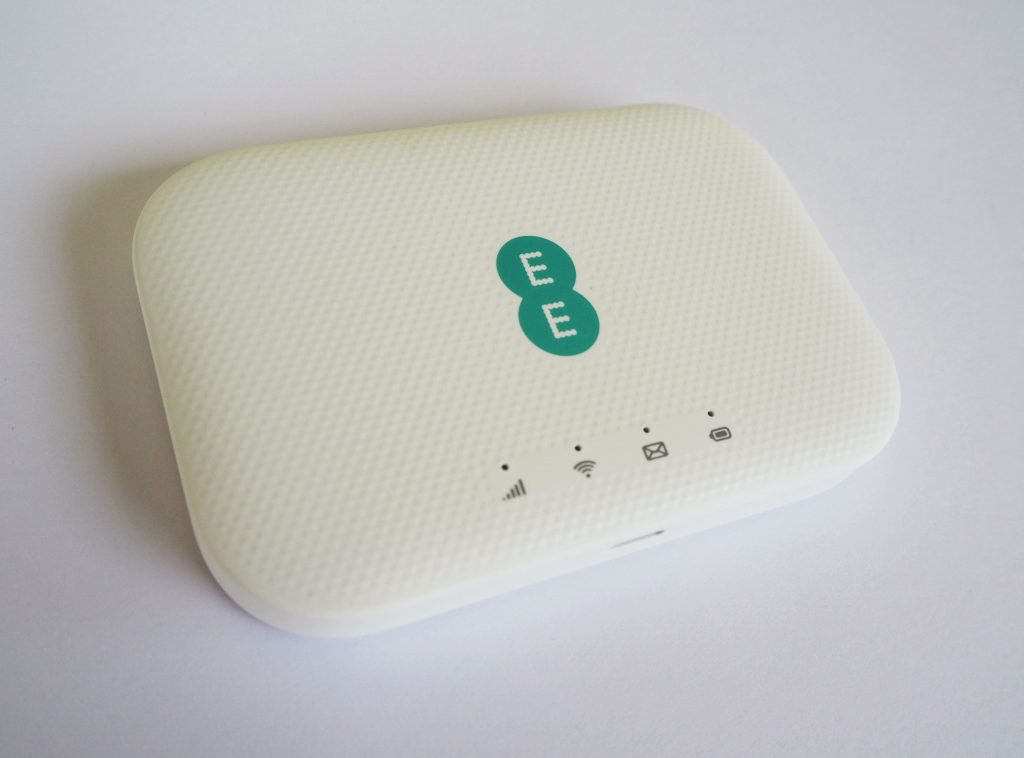 EE have the best mobile network coverage of any UK provider, meaning their mobile WiFi device is a good choice if you live in a rural area.

The 4GEE MiFi device is a serious bit of kit. It has a 30m WiFi range, and connect up to 64 devices – much better than what Three’s device is capable of.

However, it is very expensive. There are a good range of deals and contracts available, but they cost significantly more than most other MiFi devices.

This device is very similar to Three’s MiFi device. It’s about the same size and weight, supports similar speeds, and can connect up to 10 devices.

Prices are slightly higher with most of Vodafone’s MiFi deals, however you may prefer this device as an existing Vodafone customer, especially if you know they offer good 4G speeds at your address.

Read our Vodafone MiFi review to learn more about this device.

You’ve reached the end of our Three Huawei 4G Plus MiFi device review.

Hopefully this guide helped you decide whether or not this MiFi device is the right choice for you. If you’re still unsure, feel free to leave a comment below, and we’ll help you find the best way to get online.